Skip to content
I still didn’t get any photos of it but we were in Dayton again last weekend for some shooting. This time Mom and Zack’s friends had something a bit organized and there were prizes for competitions. I actually shot a little bit this time – the girls had our own targets for the .22s – but didn’t “compete.” Pete did, though, and won three boxes of shells for his guns… he left the shoot with more ammo than he started with. Woohoo!

To my surprise, I didn’t do horribly on my shooting. I hit a couple small targets (glass ones that shattered when you hit ’em) at 50 yards. I really didn’t shoot a lot since the competitions were going on, but I did load the gun on my own for the first time.

I’m still a little freaked out that I’ve now loaded and shot a gun and am getting to the point where I’m pretty comfortable doing so. I still don’t think I could kill a deer… or elk… or any living animal that isn’t a snake, arachnid or insect.

I did, however, get some photos of Velvet and Bailey, one of Pete’s chocolate labs, together. They played a lot and would have done more of it had Pete not taken Bailey out early Saturday morning for a day of quail hunting. She’s a damn good bird dog, if I do say so myself… and I can do that even if I haven’t ever seen her do it.
Velvet’s about 14 months old now and Bailey is about three years old… I think. Pete always says, “She’s three or four,” (or maybe it’s, “two or three”) but I’m pretty sure he’s been saying she’s the same age since we got together last summer. 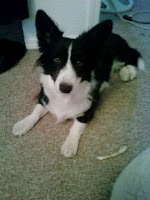