I’m really starting to think November was the wrong month for me to decide to do this NaBloPoMo thing. Hmm, let’s see, start a new job AND be plagued with the worry of posting every day? Yeah. Hey, I never said I was smart.

Anyway, I’ve been checking this NaBloPoMo page on Ning (of which I am a member) that lists some helpful prompts. I’m using one today in an effort to post something with some substance. 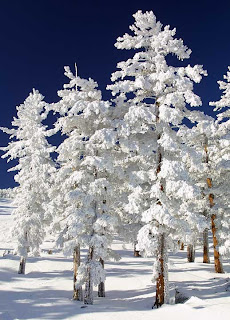 I don’t know about where you are/live, but it’s been getting damn cold here lately. I know, I know, it’s Washington and the middle of November. What do I expect? But you have to keep in mind this is coming from a girl who hates winter with the firey passion of a million suns and would prefer it to be 70 degrees year-round.*

Anyway, it’s been getting damn cold here lately. I woke up this at my usual 8:30 a.m. (I’m so lucky not to have one of those 9-5 jobs) to put the dog outside and what did I see? Everything was white. Not snow-white, but frost-white. It’s still white.

My reaction? Fuuuuuuuuuck. I almost considered going back to bed but since I knew this week’s Friday morning meeting was somewhat important, I did not.**

I say this because the first real frost of the year reminds me, every year, of my first memory of snow. My first clear memory, that is. There are snapshots here and there of 5-year-old me running around in the snow with my dad and grandma, but they’re not vivid. My first vivid memory of the snow is somewhat embarrassing.

I don’t know how old I was, but I’m going to say I was somewhere in between the ages of 7 and 10. Maybe younger, but probably not older. Mom had her video camera out (one of those huge ones that weighs 15 pounds, requires a forklift to carry and is definitely not made anymore) and was taping my brother and one of his friends playing football. I specifically remember my brother catching the ball in mid-air near the fence and flipping over it, landing in the snow.

And what was I doing?

Following Tippy’s path that circled the entire yard, yelling at my mom to get her attention. Because, you know, walking along a dog’s path she follows to her usual spots to piss and shit takes so much talent.

What I don’t even understand is that I hate being on camera. I hate the sound of my voice and I hate seeing myself as others do. I’m way cooler in my head. I guess I was pretty confident back then, though.

I was an annoying kid. I’ve always thought that… I don’t even think I would have been friends with myself until probably my sophomore year of high school. Seriously.

What’s your first and most vivid memory of the snow?

* I hate being in the snow. But I love looking at it… hence the photo. It’s pretty!
** Since I work Sunday through Thursday, Fridays aren’t mandatory for me.

0 thoughts on “Is it December yet?”