This would typically be where I’d list everything I’m thankful for, but in all honesty there’s so much good in my life, I don’t know where to start. I can say, though, I’m thankful for my family, friends, boyfriend, pets and employment. And the health of all of the above. Except Pete, cuz he now has the nasty cold I had a week ago. Sorry hon.

It’s been a rough week. I’ve been pretty down in the dumps lately and, unfortunately, Pete’s taken the brunt of it. I’m extremely thankful for him because I don’t think I would have put up with my crap had our roles been reversed. I’m a lucky girl.

Thanksgiving didn’t turn out anything like I thought it would but it turned out to be enjoyable anyway. I spent the night at the sister’s house and got some much-needed bonding time with my  gorgeous twin nieces, who, by the way, are turning a year old next month. I can’t even put into words how amazing those girls are.

It would have been nice to see my mom and best friend but circumstances kept that from happening… ugh. I don’t even want to get into that. So I won’t.

My sister had to work today (yuck!) but that didn’t stop her from participating in the Black Friday shopping. I was all for going with her when she asked me at about 10 last night… but once 4 a.m. rolled around, nothing short of an earthquake could have gotten me out of bed. And here in Eastern Washington, we don’t get too many earthquakes… so in bed I stayed. And I had a weird dream/series of dreams about tornados, police chases and an unavoidable need to get to Pullman…

We’re officially keeping Kitten. We had the opportunity to give her to Pete’s sister but when I heard that, I couldn’t stand letting Kitten go. So she’s here to say. And she needs a name. I need suggestions, because the only cat I’ve ever named was when I was, like, 4. She was black and white and I named her Oreo. So, yeah, I need suggestions. 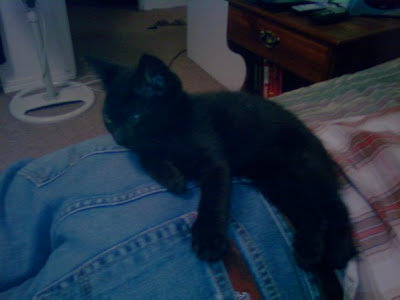 What should we name her?

0 thoughts on “Better late than never”