Tomorrow’s the day. Well, not THE day (since I don’t even really know what THE day would be), but we’re going to buy all our Christmas decorations and whatnot tomorrow.

And since I’ve been so severely neglecting Blogland, here’s an update in other areas of my life (in bullet form, because that’s apparently what I’m into tonight):

Here are my nieces because I’m totally trying to come to terms with the idea that they’ll be A YEAR OLD a week from today. Don’t get me started. That’s S. on the left, eating pine needles, and K. (not me) on the right, just chillin’. They’re nine months in this photo. And adorable. 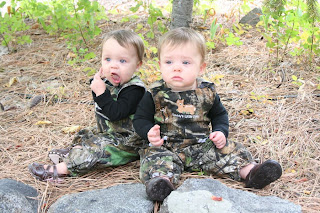