OK, so it happened a few days ago, but the reality of it is sinking in: not having a car in Pullman sucks.

It probably wouldn’t be so bad if (a) I weren’t accustomed to having a car and being able to go wherever I wanted, whenever I wanted, save for those silly parking limitations on campus, or (b) there were actually a good amount of snow/ice on the ground that would stop me from driving in the first place.

… which is funny, really, because the reason I don’t have my car in an operable state right now is precisely that. Damn ice.

Here’s the scenario, in a nut shell: I drive to school on Thursday for her ethics exam and HBM presentation, dressed rather well if I do say so myself. Less than halfway to the CUE parking garage, the ice and curb decide to tag-team the Jetta. The Jetta may have speed and agility on her side, but strength and resistance to blunt-force trauma are definitely not on her list of attributes. I’m pretty sure my alignment is royally effed, at the very least. Let’s hope for that, anyway.

This isn’t the first time I’ve been sans car in Pullman, though. Back in my Cougar Crest days I was without a vehicle for awhile in the time period between totalling my beloved Grand Vitara and purchasing the Jetta. Then, of course, there’s always the winter months when Pullman becomes so Arctic Tundra-like that the Jetta doesn’t really move at all. Ever.

But… ugh! There’s hardly any snow on the ground right now (knock on wood.) and the roads are basically clear (knock on wood x2.) and I still can’t drive! The only place I’m going until it’s fixed is Les Schwab tomorrow (or whenever they say I can come in to check my alignment) or wherever else I may need to take it for repairs.

I don’t really have a photo to go with this so here’s the most recent picture my sister sent me via cell phone of Keatyn and Shaylee. 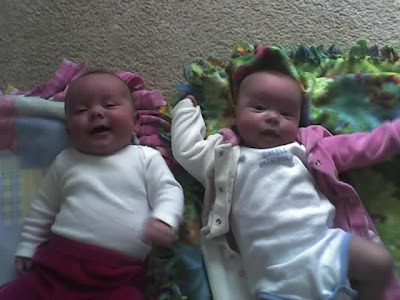