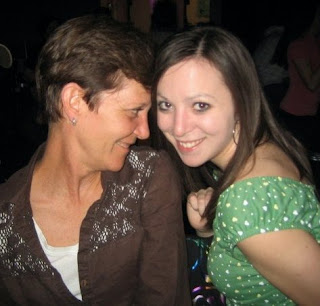 … was, all in all, a success. As usual, Mom and I didn’t do anything sponsored by the university or anything – we had originally planned to go to the bowling tournament at Zeppoz on Sunday, but I think noon was just a bit too early for us after the night we had Saturday – but it was a great weekend anyway.

After taking it easy and spending more than planned at Dissmores on Friday, we (OK, I) slept in on Saturday before we went shopping (yay for Ross) and watched hours of the Deadliest Catch. The plan was to go to Valhalla for 80s night but I didn’t know there was a comedy show there sooo that didn’t happen.

Instead, we opted to go to the Zzu for a drink or two while we decided what to do from there. The hynotist there turned out to be pretty entertaining, even if it all was obviously a bunch of crap. Then, we ran into a bunch of my friends (Jessica and her family, Enrique, Tai, Mike) and we all ended up having too much fun together. Mom and I did our fair share of dancing and I specifically remember Jessica pulling me onto the “stage” for the YMCA. Needless to say, pictures of that didn’t turn out so hot.

It’s weird to think that I’m never going to go through the whole Mom’s Weekend gig again: doing the obligatory pre-Mom’s Weekend drinking on Thursday night then feeling a bit under the weather Friday morning, but having to wake up and clean the apartment, do the dishes and finish at least a couple loads of laundry so Mom doesn’t think I’m a complete bum.

It’s also weird to think that I’ve actually done the whole Mom’s Weekend gig for four years. It’s a little hard to believe that much time has passed since freshman year when Mom toughed it out in the dorms with me for a weekend, despite the close living quarters with my roommate.

All this thinking has made me start to regret opting out of writing a Mom’s Weekend column, but I guess it is what it is. Mom was a trooper – she never missed a Mom’s Weekend and even came up for a football game or two in what I think were attempts to make me feel better at my lack of participation in the Dad’s Weekend festivities.

Mostly, though, it’s weird to think that this journey really is coming to an end.