I was waiting to write another post on here until I got internet at the new casa, but some stolen wireless will do for now.

A lot’s changed in the last few days – I no longer work at the Evergreen or live in Pullman.

The house… ah, the house. Well, it’s starting to feel like home already if that means anything. I’m sure that has more to do with who I live with than anything, but it’s home nonetheless. It’s kind of hard to believe that a week ago I was still wondering what the hell I was going to do after graduation.

The job’s going well, almost to my surprise. It’s definitely something new, which I like. Today I got to talk to a guy that just signed a three-year contract with the Pittsburgh Steelers, so that was cool.

I’m adjusting pretty well to living in Moses. Peter pointed out yesterday that it’s probably a good thing we didn’t decide to live in Ephrata. As he phrased it, I’m used to the “hustle and bustle” of Pullman, and in Ephrata I’d feel like the world came to a halt. Probably true. Moses isn’t completely dead, anyway. For example, tonight was the second night in a row I saw the police in action on my way home from work…

I’m pretty much counting down the days until I can bring Velvet home with me. Here’s a cute adorable picture of her as a pup, because that’s how I see her in my head. 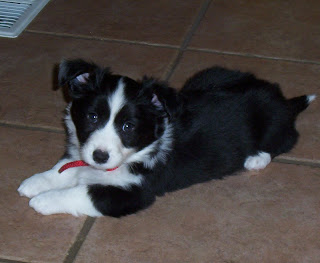