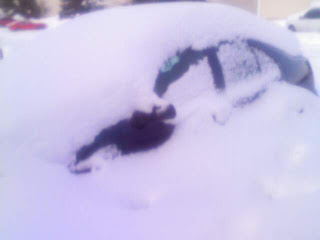 I’ve been counting my blessings lately, as far as the weather is concerned. Don’t get me wrong, I’ve got some major blessings in my life aside from the weather, but when your car’s literally covered in snow and you have to take the bus to get to your bowling class (ugh), you’d be pretty damn happy about the warmer weather, too. As you can see, it wasn’t long ago when my car was buried by the snow that piled up after blizzard after blizzard (after blizzard… after blizzard… honestly, who wants to live in a snow globe?) terrorized the Inland Northwest.

Peter was sweet enough this weekend to dismantle the wall of ice that formed from the snow plows kindly piling the snow behind the cars that couldn’t drive in the snow – further disabling them from driving even once the roads were clear. Neat.

So I’m on the road again. Here I go again on my own. Hooray for cliches. I can go get my own groceries when I happen to have enough money to afford them, drive to Zeppoz on Tuesday afternoons for my bowling class when I’m not too busy napping and – gasp – drive to work on Sundays (or, Mondays when a holiday weekend is involved) and not have to worry about how the hell I’m gonna get home come quittin’ time. Neat!