One of my all-time two all-time top five all-time favorite bands, Disturbed, is coming out with a new album in May.

Jesus. I’m so excited I could just pee. Seeing, “NO TOUR DATES ARE SCHEDULED.” on the band’s website would normally upset me, but not when it’s because, “DISTURBED IS CURRENTLY IN STUDIO RECORDING.” (Please note there are no lowercase I’s to be found. I guess they’re not edgy.)

I can’t wait to see what they come up with this time. The album’s title, “Indestructible,” and the images of shattered glass that surround it on their website’s splash page excites me even more. It looks like there’s a bullet hole, too. More violence? More angry screaming? More lyrics that are to die for even though I have no idea what they mean?

Okay, let’s do a quick run-through of their albums thus far. Not because I think you care, but because they bring me just about as close to orgasm as possible without having any direct contact with me. 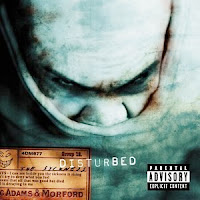 The band’s first album was released in March 2000, perfect timing for me who was just starting to struggle in her freshman year of high school and needed some sort of outlet for her rage. I’m sure you’re heard “Down with the Sickness,” which is the song that basically launched Disturbed’s career, but have you heard the spoken word part of the song that radio stations usually don’t play?

“And when I dream / No mommy don’t do it again / Don’t do it again / I’ll be a good boy / I’ll be a good boy, I promise / No mommy don’t hit me / Why did you have to hit me like that mommy? / Don’t do it, you’re hurting me / Why did you have to be such a bitch? / Why don’t you just fuck off and die… / Never stick your hand in my face again bitch, fuck you / I don’t need this shit / You stupid, sadistic, abusive fucking whore / How would you like to see how it feels to die mommy? / Here it comes get ready to die” 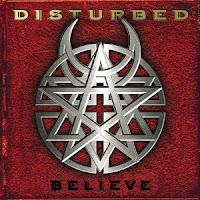 Two years later, Disturbed was back on the scene with the release of their second album, “Believe.” Now, in my opinion, no single song stuck out to me off this album, but that’s just because the entire album was pretty damn good. Disturbed stuck to their succinct style with one-word song titles, including “Intoxication,” “Mistress,” “Darkness” and of course “Believe.” Every song on the album is named accordingly. The album itself was as a whole less aggressive than “Sickness,” but people loved it – and so did I. The album debuted at #1.

Now, I’m not sure I would say this album was #1 as far as Disturbed goes, but the only competition I can think of in the music industry would be Godsmack. “Sickness” will always have a special place in my heart – there’s something about that aggressive screaming that gets me – but “Believe” was, and still is, an album worth listening to. 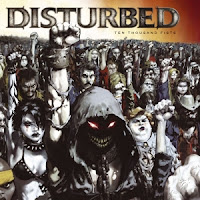 After three silent years, Disturbed was back in our faces with their third album in 2005. My brother and I went back and forth a lot on this one but we all know I was the first to recognize how good the album really is. It was difficult to decide if I actually liked it or not because the style was completely different than anything Disturbed had done in the past – there’s even a cover song, “Land of Confusion” – and there’s more to this album than just angry screaming. Disturbed went political with this one, especially with “Land of Confusion,” discussing the war in Iraq through an old war song. (The band Genesis originally recorded “Land of Confusion” for their 1986 album “Invisible Touch.” It deals with the Cold War era of the 1980s.)

Whichever way you look at it, the album’s good, Disturbed is great and… May is looking better and better every day.