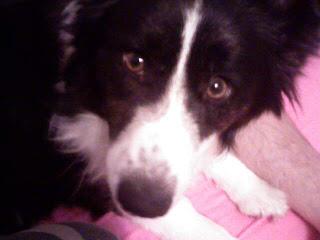 Since my car’s been broken down for well over a week now, I’ve been working from home during the day until I have to go into the newsroom to put together the Herald’s sports pages at night. Therefore, I’ve been spending far more time than usual on my fabulous rocking couch (yes, a couch – well, loveseat, technically – that rocks like a rocking chair).
Which means I’ve spent more time in front of the TV (I need background noise) and with my dog, Velvet. This has resulted in two things, one of which is not my proudest confession ever:
1. Velvet now thinks I’m available to play anytime she wants. Lately she’s been getting extra frisky (probably because Peter hasn’t taken her to the park in about eight years) and has taken to barking and growling at me when I don’t immediately pick up and throw the rope she’s dropped at my feet. She’s a great fetcher but when I’m on the phone with a source, it’s just not a good time to play!
2. I watch MTV. A lot. More than I used to. More specifically, I watch “A Shot At Love With Tila Tequila 2.” A lot. So much so that I know who is right for Tila (Bo) and who isn’t (that douchebag guy from Jersey who, thank god, got kicked off recently). It’s gotten to the point that I’m pretty sure I’ll be pissed if Bo doesn’t win. Ugh… I’m so trendy.