Okay, so when I say “almost” I really mean… we still have a couple months, but these days the months are FLYING by, so before I know it, it’ll be time to celebrate Little E’s FIRST BIRTHDAY!

I’ve been thinking a LOT about what I want to do for his first party. With Big E, I didn’t plan well at all (being a first-time mom while working full-time didn’t leave a lot of time for party planning) and it showed. Big E’s second birthday party was John Deere themed and I was so proud of it! (For his third birthday we played it seriously low-key because he had/has such stage fright and we wanted it to be, you know, enjoyable for him.) So, I’ve known all along I wanted to do something special for Little E’s first birthday party.

Enter: Minted. They have so much kids party decor and it’s all. freaking. adorable. I decided to go this route instead of the printable route because, well, it’s easier on me. I think I’ve even narrowed it down to which set I’m going to use for Little E’s big day! But I’m totes not going to share it yet because I like to be mysterious.

HOWEVER. There are some decor packs I would like to share with you! If I had a baby girl, I’d be going nuts over these.

Let’s Get This Party Started 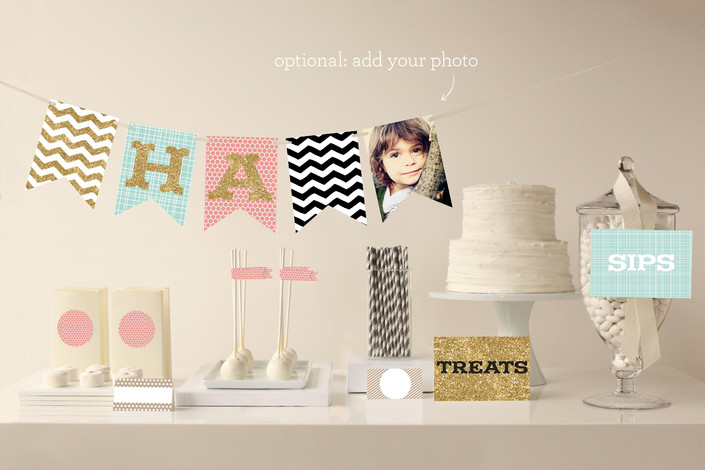 This one is by far my favorite. Pink. Glitter. Chevron. Lord help me (and my bank account) if I ever have a daughter. 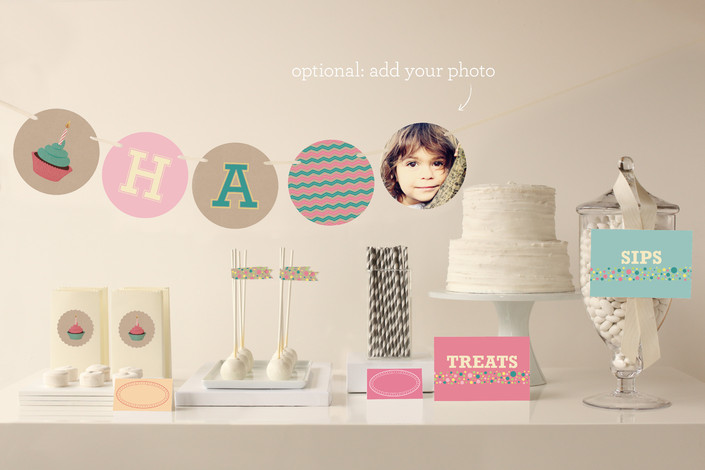 More pink and more chevron, but this one has the added bonus of dots! I like the neutrals mixed in on this one. Usually cupcake type things are a big turn-off for me, but these aren’t too in your face for me. 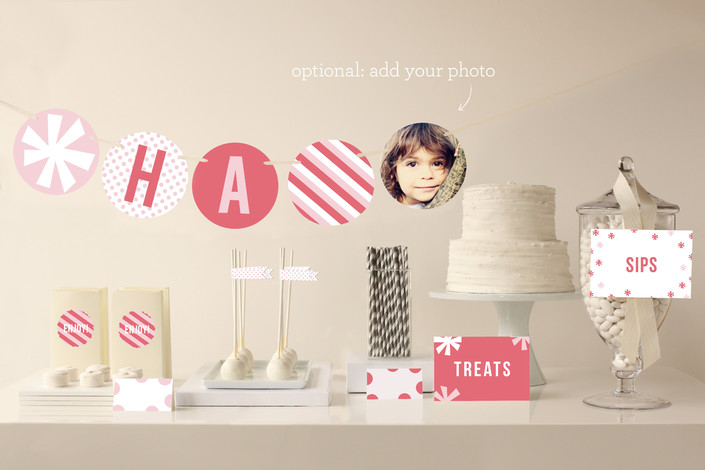 And last but not least… ALL THE PINK. Plus polka dots. Plus stripes. Yep, love it.

I received compensation in exchange for this post. All opinions are, however, entirely my own.

I’m so lucky that Big E is such a good kid. He’s grown up so much in the last couple months and I couldn’t be more proud of the boy he’s becoming. Little E is a handful – instead of nursing every 4ish hours like his big brother did, this little guy is a snacker. He nurses for about 10 minutes… every hour and a half or so. Sometimes less and even less often, sometimes up to two or even three hours. I’m buried in never-ending laundry and dishes and diapers. I have to plan ahead in order to shower.

I don’t remember the last time I was so happy.

WARNING: This is a birth story. A REAL birth story, and while I’m going to try not to overshare I’m also not going to sugarcoat anything. There will be talk of blood and my lady parts. Continue at your own risk.

I woke up at about 3:30 the morning of Friday, May 2 to a mild contraction. I’d been having somewhat uncomfortable Bracton Hicks contractions so I wasn’t sure if it was the real thing, so I let my husband continue to sleep (especially since he’d only been home from work for a few hours). But at about 4:30 am I had some bloody show and I knew it was the real thing, so I gently woke P up to let him know what was happening.

Since the contractions were still fairly short and far apart (and Big E was sleeping peacefully), we went back to sleep to get as much rest as possible. By about 7:00 am though, the contractions had basically stopped. But, I know my body and I had a regular checkup scheduled with my midwife for that day anyway so I chose not to go into work. I went back to sleep for a little while and we went to my appointment at the regular time… and by then my contractions were getting a little more regular but still fairly short and at least 30 minutes apart. I told the girls at the front desk (with whom I’m on a first-name basis with now, by the way) that I was having contractions so they could gove my midwife and her nurse a heads up.

I don’t think my midwife believed me though, because when she checked to see if I was dilated I was at a solid 3 cm and the look of shock on her face was priceless. She continued with her regular check-up, then asked me about something we had previously discussed: “stripping,” or as she prefers to call it, “cervical stimulation.” We’d discussed it because my level of discomfort was so incredibly high and I was just so ready to have this baby. We went ahead with the, um, stimulation, then she sent us on our way with the advice to “go have sex.” That last part totally didn’t happen because we needed some things from the store and by the time that was done, I was hungry and then…

Almost nine months has passed now, so details are a little fuzzy, but my contractions were getting longer, more intense and more frequent very quickly. At this point I was text messaging my midwife, who was telling me to wait to go to the hospital until they were closer together.

I know my body, I told myself. We need to go now.

And thank GOD. Because, as you’ll read in the next part of this story (coming soon!) we didn’t have much time to spare.

My Little E is growing up. Crawling and standing and trying to walk. Learning to clap. Wearing 2-piece pajamas.

It makes me so sad. He is MY BABY. And soon he will no longer be considered a baby but a toddler, and then I won’t have a baby anymore.

And don’t even get me started on Big E. He’s just so… big. He starts preschool this fall and even though it’s still, like, 8 months away I’m still having a pretty hard time with it. Wasn’t he just a baby yesterday?

Sigh. I mean, the one baby thing he was holding on to is gone (diapers) and now he’s just this… boy. This hilarious, smart, active, speaking in full sentences, making jokes BOY.

Time. It goes by so quickly. The days drag on forever sometimes but the weeks, months, years… they’re gone before you know it and all of a sudden your baby is wiping your kisses off his cheek and you’re left wondering when your heart grew legs and jumped out of your body wearing Spiderman rain boots.

Only it’s not Wednesday, it’s Monday, and I don’t even care.